Rising to the Top of the Drumming Game

Aaron Rossi, originally from Rhode Island, moved to Southern California when he was seven, started playing saxophone at 10, picked up the drums at 15, and started playing drums professionally at 20, touring Europe and the U.S. extensively. Ten years later, Aaron is still living the rock-and-roll dream, still touring and playing, and is currently performing with one of the world’s heaviest industrial metal bands, Ministry. END_OF_DOCUMENT_TOKEN_TO_BE_REPLACED 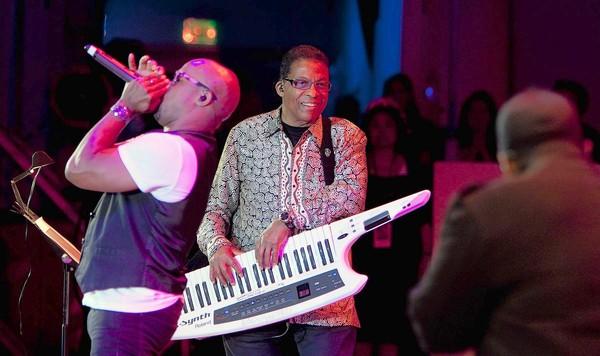 The picture above shows Herbie Hancock at the Hollywood Bowl during the 35th Annual Playboy Jazz Festival, and he is clearly digging into a song on his iconic Roland AX-Synth. What the picture doesn’t show, however, is the amazing infrastructure of technology that Herbie and his tech, Brian McCollough, have assembled for Herbie’s live show. From his use of multiple iPads to some fairly complex programming, Herbie’s live rig showcases both the creativity and necessity behind his ever-evolving live performances. END_OF_DOCUMENT_TOKEN_TO_BE_REPLACED

The Audience Inspires His Daredevil Theatrics

Foxy Shazam has been making a name for itself since 2004, touring constantly and releasing four albums to date. With a keyboardist who is sometimes referred to as the “Evel Knievel of rock and roll” and having openly admitted their ambition “to be the biggest, most ostentatious band on the planet,” the Cincinnati-based quintet delivers heavy, keyboard-driven pop/rock with a ‘70s glam flare. Their last album, The Church of Rock and Roll, was released in 2012 on I.R.S. Records with the single “I Like It” reaching the top five of Billboard’s mainstream rock chart. END_OF_DOCUMENT_TOKEN_TO_BE_REPLACED

How I Use the V-Accordion

There are few artists in the world who’ve had songs and albums at the top of the Billboard charts over a span of three decades. Among those elite few is perhaps the most famous parodist in pop music history, “Weird Al” Yankovic. Since the beginning of MTV in the ‘80s, Al has been there with his hilarious and spot-on parodies of popular songs. Those songs along with a polka-laden library of original songs have gained him legions of die-hard fans around the world. An accordion player first and foremost, Al uses Roland’s FR-7 V-Accordion. END_OF_DOCUMENT_TOKEN_TO_BE_REPLACED

INTEGRA-7, the Best Sound Modules All in One

Electronic dance music DJ and producer Richard Vission discusses his use of the INTEGRA-7 in his remixes and original music productions.

Richard Vission has been a preeminent house DJ and producer in Los Angeles since the late ’80s. His musical career started when DJ culture was first taking flight in Los Angeles, becoming known for a freewheeling mixing style that cycled through dozens of records per hour. He took the same frenzied sound into his production career, scoring big in 1992 with the sports-anthem classic “Jump” as a member of The Movement. END_OF_DOCUMENT_TOKEN_TO_BE_REPLACED

On the Road with Netsky LIVE!

Netsky Live at the Fonda Theater in Los Angeles, CA.

A celebrity in his native Belgium and growing in popularity worldwide, Boris Daenan—better known as Netsky—has received numerous awards and accolades for his new-school brand of drum and bass. In 2009, Hospital Records signed him to an exclusive deal, and his first release with the influential UK label was the highly successful single “Memory Lane,” followed soon after by the chart-topping debut album “Netsky.” In 2012, sensing that he could take his show to another level, the DJ and producer put his turntables aside and unveiled Netsky LIVE!, an EDM stage show featuring a complete band. END_OF_DOCUMENT_TOKEN_TO_BE_REPLACED

The Making of “Egypt, Egypt”

In January, the Red Bull Music Academy debuted their Key Tracks series with dublab, an LA based non-profit public broadcasting Internet radio station. We were pleased to learn that the series opened with Electro legend Egyptian Lover who happened to make his monster 1984 track “Egypt, Egypt“ on a Roland TR-808 drum machine and a JUPITER-8 synth. In this video, the Egyptian Lover takes us back a couple of decades by recreating his original tune and talking about his inspiration for the song. Check it out!

From Randy Rhoads to Rudy Sarzo, This CUBE-40 Amp Has a History

Most guitarists know that Randy Rhoads used stack amps on stage. However, he also used a very special combo amp. What was it? Bassist Rudy Sarzo revealed that amp on the set during an in-depth interview with Gary Lenaire at the Roland Studio in Los Angeles.

END_OF_DOCUMENT_TOKEN_TO_BE_REPLACED

Jude Gold is a true Renaissance man in the world of guitar. He splits his time between Los Angeles and the San Francisco Bay Area, working as a session player and sideman for many artists, including Jefferson Starship, Brendon Small, Miguel Migs, JGB, Eddie Money, and more. He’s also a noted guitar journalist with Guitar Player magazine, with hundreds of interviews and articles to his credit. To top it all off, Jude is a devoted educator who served as the Director of the Guitar Program at the esteemed Musicians Institute for four years and is currently an instructor there. END_OF_DOCUMENT_TOKEN_TO_BE_REPLACED

The Cult of Tone

Led by guitarist Billy Duffy and vocalist Ian Astbury, British post-punk band The Cult is still going strong after nearly 30 years. Formed in 1983 and strongly influenced by classic rockers from the ’60s and ’70s, the group unleashed a hard-edged sound with shades of psychedelia that presented a strong contrast to the drum machine-driven synth pop that led the UK music scene at the time. Powered by Duffy’s melodic riffage and Astbury’s bluesy wail, the essential ’80s albums Love, Electric, and Sonic Temple saw the group evolve in an increasingly heavier direction, a tradition carried on today with their latest release, Choice of Weapon. END_OF_DOCUMENT_TOKEN_TO_BE_REPLACED